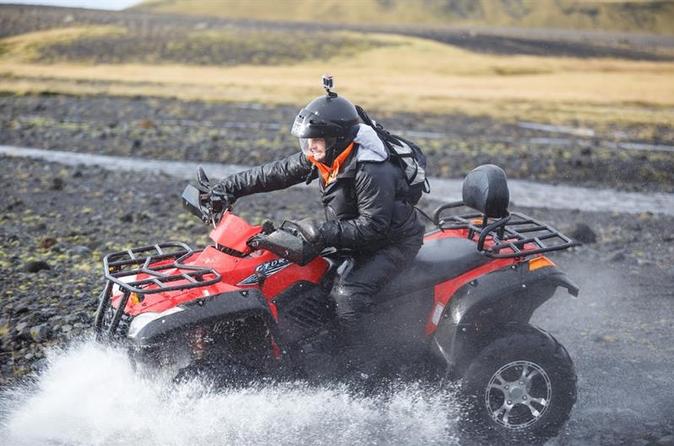 Experience the South coast of Iceland holds some of the most beautiful natural attractions in Iceland. The vast expanse of Iceland’s southern coastal plain, sandwiches snow-capped glaciers and the sea and crisscrossed by some of the country’s most powerful rivers, is the subject of this option-packed tour. First stop is the waterfall Seljalandsfoss, set against the backdrop of Eyjafjallajökull glacier, before continuing to the waterfall Skógarfoss and Folk Museum at Skógar. One of the most interesting of its kind in Iceland, the museum building are roofed with turf in the traditional way.


This two hour ATV Quad biking tour begins at our base nearby the Mýrdalsjökull glacier in South Iceland.  We start by going over the tour plan and safety instructions. From the base we cross some small rivers and head down to the black lava sands fields which derives from the dormant volcano Katla.  Down by the black beach we stop and enjoy the amazing view up to the Mýrdalsjökull glacier and along the coast to the southernmost part of Iceland, the small peninsula Dyrhólaey. We then head along the coast to the famous aircraft wreck, from there we continue to the river Jökulsá and up to the foot of the mountain.  Upon our return we follow the mountain back to the base.
On this tour you can get in touch with the raw black lava sand landscape by the south coast. Unforgettable experience of conflicting landscapes where the nature envelops the traveler in its warm embrace.