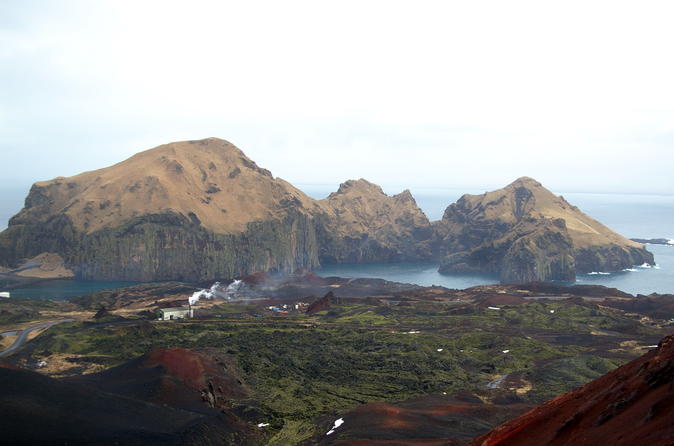 We visit the puffins, museums, and the craters edge of a recently-erupted volcano.

The Westman Islands are a group of 15-18 islands, depending on how they are classed, and about 30 skerries sand rock pillars, located off the mainland’s south coast. The islands were formed by submarine volcanic eruptions along a 30-km long fissure lying southwest to northeast. The largest island is Heimaey, 13.4 km2.Most of the islands have steep sea cliffs, and are well vegetated. Bird hunting and egg collecting are traditional to the islanders’ culture.


On the morning of 14th November, 1963, crew aboard Ísleifur II saw a column of black dust rising from the sea, south-west of Heimaey. An eruption had begun on the seabed which was to last almost four years. By the second day of the eruption the island, Surtsey, was already 10 metres high. When the eruption ended, on 5th June, 1967, the island covered 2,8 square km and reached a height of 170m. Surtsey is protected by law and Icelandic scientists continue to document the colonization of the island by plant and bird life.

The Eruption on Heimaey, 1973
The eruption on Heimay began on 23rd January, 1973, just before two o´clock in the morning. A fissure opened on the eastern side of the island, only 300-400 metres from Kirkjubæir, the most easterly houses in the town. The inhabitants of Heimaey were woken by the police and firebrigade as they drove around, raising the alarm with their sirens. People streamed down to the docks. Fortunately the weather had been stormy the day before and most of the island´s fleet of 60-70 fishing boats had stayed in harbour. The boats ferried the town´s people to safety in Þórlákshöfn.

We visit the puffins, museums, and possibly walk up to the crater of the  recently-erupted volcano.

We visit the puffins, museums, and the craters edge of a recently-erupted volcano.